How do we overcome the challenges of the pandemic and education?

How do we overcome the challenges of the pandemic and education?

The effects of the pandemic pose challenges for rethinking academic spaces to ensure students’ physical and emotional health.

The formula for Rosa has been to read and write about what makes her feel bad… “On many occasions, I cried. I’ve tried to distract myself by drawing or watching TV shows. COVID-19 has changed me so much I don’t even recognize myself.”

This 14-year-old Guatemalan teenager shared her experience with U-Report, a digital platform from the United Nations Children’s Fund (UNICEF) that promotes youth participation in issues of mental health service investment, quality, and access in Latin America.

Her words reflect the feelings of thousands of children, teenagers, and young adults in Latin America. Depression, stress, and anxiety have been a constant in this population group since the first stages of the pandemic and have continued now that in-person classes have resumed.

The transition has not been easy. “What they experience is in part a rational fear, but it also starts to become something irrational, a phobia that can begin to create problems in their everyday lives,” explains Colombian Vanessa Rodríguez, a cognitive-behavioral psychologist.

Education during the pandemic

Students, deprived of social interaction with others and exposed to spending as much time as possible in front of a computer screen to receive an education that was in many cases improvised, saw their academic learning affected by the prolonged shutdown of schools. Globally, in low- and middle-income countries, the World Bank estimates that 63 out of every 100 students suffered learning poverty due to the pandemic.

However, it clarifies that the crisis had already begun, with a learning poverty rate that was 53% in many countries.

According to a UNICEF survey of 200 countries, nearly 60% of the children and teenagers who missed an entire school year due to the lockdown live in Latin America and the Caribbean.

According to the 2020 Survey to Measure the Impact of COVID-19 on Education presented by the National Institute of Statistics and Geography (INEGI), 62% of all Mexicans between the ages of 3 and 29 (33.6 million) were enrolled in the 2019-2020 school cycle; 2.2% did not complete it, either due to the virus or lack of resources.

Once the mass lockdowns were over, children, teenagers, and young people met again with fear and uncertainty, but also with unconcealed joy, in spaces that seemed to have been frozen in time.

Return to school has been staggered in most Latin American countries.

However, a UNICEF report says that full or partial school closures still affected more than 635 million students in January 2022. According to Robert Jenkins, UNICEF Chief of Education, “we are looking at a nearly insurmountable scale of loss to children’s schooling.”

In addition to emotional and learning upheaval, there is a reported increase in school dropout rates, a drop in enrollment, and difficulties in the transition from middle school to high school, and even from preschool to elementary school, according to Marco Fernández, a researcher at México Evalúa (Mexico Evaluates) and professor at Tec de Monterrey’s School of Government and Public Transformation.

“Some 64% have returned to campuses, but of that percentage we don’t know how many are going on a daily or staggered basis,” he says.

In its report Acting Now to Protect the Human Capital of our Children, the World Bank warns that “learning poverty at the end of primary education could increase by more than 20% and 2 out of 3 students in secondary education could fall below minimum proficiency levels.”

In addition, learning losses will be substantial for the most disadvantaged students.

Many Latin American homes lack basic services such as electricity, so it was unlikely they would have Internet to access remote education, especially at the start of the pandemic.

Images of children traveling long distances to reach a connection point or climbing hills to access a signal were some of the region’s vivid news stories, which highlighted the sacrifices made by families despite their adversities.

However, these images only reflect how COVID-19 deepened the inequalities that have always been present.

Digital access has affected the teaching-learning process, not only because of Internet infrastructure and coverage, which is unequal and deficient in many cases, but also because of the cost of mobile devices and data usage.

According to the World Bank, less than 50% of the population in Latin America and the Caribbean has fixed broadband connectivity and only 9.9% has a high-quality fiber optic connection at home. While 87% of the region’s inhabitants live within range of a 4G signal, actual usage and penetration remains low (37%).

Only 4 out of 10 rural Latin Americans have connectivity options, compared to 71% of the urban population.

It was practically impossible for virtual education to work in a household with five children and a mid-range computer or smartphone because, in addition to this limitation, there is the low digital literacy of both students and parents as well as teachers.

“We abruptly switched to a remote system without the necessary teacher training and without investment in technological equipment,” explains Argentinean teacher María Gorricho.

In this process, television and radio played an important role in mitigating the lack of Internet access. In Mexico, television classes were an alternative in the most impoverished households through the “Learn at home” program launched by the government in April 2020. However, according to the United Nations Educational, Scientific, and Cultural Organization (UNESCO), 4.47% of the Mexican population still does not have a television.

Considering the precariousness of its connectivity and reach, Peru also opted for this alternative. According to the International Telecommunications Union, only 29.8% of households in that nation have Internet access, one of the lowest percentages in the region.

The circumstances of the pandemic made it necessary to take drastic measures which, according to Cristian León, Director of the Bolivia Internet Foundation, were not taken by most governments in the region, unlike in more developed countries, where more effective programs and public policies were implemented.

“We fear that in the medium and long term, these technological limitations will have a direct impact on the labor market that the coming generations will have to face, which will be a strong need for technological skills,” says Claudio Rama, a specialist in higher education management and policies in Latin America and former Director of UNESCO’s International Institute for Higher Education in Latin America and the Caribbean.

For many, a WhatsApp chat turned almost into a classroom was the only possible way to not miss out on their education, but the gaps are being felt and loom large, and the disastrous verdict points to irreversible effects.

Despite some believing that this generation is already lost, it does require immediate and effective responses from governments, organizations, and educational communities.

In Chile, for example, 20 proposals have been submitted under the “Together, Chile recovers and learns” plan for the next four years.

The idea stems from a process that the Ministry of Education initiated in 2021, when it launched a survey of its citizens that obtained 14,000 responses.

Experts agree that it is time to address educational problems in depth in order to think about a transformation with models in line with the new normal. However, can we erase the scars of all this time and take a path toward a better future?

Human Rights Watch, in its report Years Don’t Wait for Them, insists that urgent action should be taken and policies that create inequalities should be reversed. “Governments’ goal should not merely be the return to school. They should also ensure that those who were not able to learn at the same pace as their peers during the pandemic catch-up on what they missed,” the document says, and recommends extending education to children “persistently excluded from schooling even before the crisis.”

This crisis is an opportunity for systems that are willing to change and transform themselves to aim much more focused efforts on schools.

“There is a need for Mexico’s states to level up in their ability to implement educational policies in their jurisdiction because we’re going to be really hobbled if they’re going to wait for government guidelines,” explains Marco Fernández about the situation in Mexico.

Although these changes will not occur at the same pace in all countries, especially due to different levels of delayed development, each country can build opportunities to reorient the teaching-learning processes, which will be predominantly hybrid.

“We discovered during lockdown that spaces for reflection and discussion of new ways to carry out the teaching-learning process are essential to the search for solutions due to serious challenges such as the pandemic. These practices must be strengthened with institutional spaces and comprehensive support that puts students, teachers, and support staff at the center,” says Luis Omar Peña, leader of experimentation and impact measurement at Tec de Monterrey’s Institute for the Future of Education.

As Mónica Morán, an 18-year-old from Querétaro, says, it is important to understand that “young people are facing the same pandemic, but we live in different contexts and experience different privileges.” She shared her experience with the U-Report initiative and, despite its negative elements, noted that lockdown also gave her opportunities she had not explored, such as discovering spaces in her home that she had not enjoyed before because she had spent so little time there.

In addition to the effects on their mental health, students also experienced family and work losses that occurred at home and have affected this generation’s social development.

“Emotional health risks have been high, and not enough efforts are being made. We’re not even thinking about recovering the wellbeing and the learning that have been severely affected,” adds psychologist Vanessa Rodríguez.

Greater investment is needed to address this problem, which is affecting more and more students in the region every day, as well as breaking down the stigmas that prevent psychological, bodily, and emotional aspects from being dealt with more openly.

A new process must be undertaken that needs to respond to the experiences learned during lockdown, as well as a situation that has dragged on for a long time.

In Mexico, education “is very neglected, left to its own devices, and this undermines academic development from kindergarten to university levels. We want to be competent, but it’s still difficult because there is no government policy to address this,” says Yael Martínez, a member of the “Rafael Ramírez” National Federation of Revolutionary Students (FNERRR).

Mexicanos Primero (Mexicans First) found that 75% of the students who graduated in the 2020-2021 cycle were not able to understand a text at their grade level.

There are still no specific data to help understand the magnitude of psychosocial, physical, and nutritional consequences beyond learning. Even so, the challenge is to accelerate recovery and try to reverse the loss in schooling.

As well as affecting dropout rates and enabling the looting of schools, the pandemic left its mark on Mexican students.

7 out of 10 students had increased vulnerability and emotional distress during the pandemic.

There was a delay of between 1 and 2 years
in courses taken and planned for the future.

There was a 1% to 3% impact on GDP due to loss of skills in cohorts of affected students.

10.9% of high school students did not continue their studies. 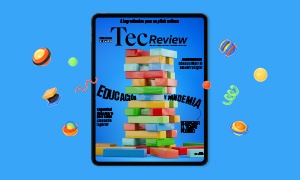