Is the metaverse a new world order?

Is the metaverse a new world order?

Science fiction came up with the term, but we are now inhabiting virtual ecosystems that go beyond the limits of the material world.

What is the metaverse? If Joanna Stern had been told it, she wouldn’t have believed it. In just one day, she camped with other “people,” went to a bar where she “saw” a comedian give a show, and “had breakfast” in Machu Picchu. She experienced all of this through a virtual reality headset and apps that she used for 24 hours in a hotel near her home in New York.

As this Wall Street Journal reporter put it, she was strapped into the metaverse, the next step in hyper-digitization and connectivity, a new era in human interaction.

What Stern actually did was set foot in a future outlined by science fiction in the 1990s. Experts agree that there was a surge of interest during the pandemic, thanks to immersive video games such as Roblox, which culminated in October 2021 when Facebook announced that it would change its name to Meta.

What is the metaverse?

For many, this is the culmination of a process that began to take shape years ago. For others, it means confronting an unfamiliar term (and evolutionary step).

Technologists point out that the metaverse will imply a change in the way we relate to technology thanks to the implementation of immersive experiences, the growth of virtual and augmented reality, and digital transactions.

“It’s like talking about the Internet. It’s not a single concept but a set of concepts working in a kind of orchestrated way to achieve a great idea,” says José Mondragón, a professor in video games at Tecnológico de Monterrey’s Toluca Campus.

This is how we understand the existence of companies like Republic Realm, which sells and develops virtual real estate projects in different metaverses.

Or how figures like Ariana Grande or Travis Scott turn the vast terrains of online games like Fortnite into venues for concerts with millions of spectators, something unthinkable in the real world. Or how Pokémon Go positioned its creator Niantic as an example of how augmented reality, a fictional world −like that of Pikachu− and the real world collide in unique experiences through a cellphone.

How do you get into the metaverse?

The idea of a world of virtual experiences is not new. In 1978, writer Ernst Cline played Adventure on his Atari 2600. The pixelated graphics required a lot of imagination to identify them as rooms that hid what today is considered the first easter egg in the history of a video game.

“It was my first virtual reality game,” noted the author of Ready Player One, one of the novels that science fiction fans point to as a reference for the metaverse that is being shaped, with avatars and VR headsets included.

The origin of the complexity of the metaverse’s immersive and collective nature can be found in the simplicity of role-playing games popularized in the 1970s which, with a simple board and a set of instructions, allowed players to play as wizards, barbarians, and sorcerers.

“Dungeons and Dragons is the prototype of the metaverse, an imaginative narrative where people are inside the experience,” explains technologist Jon Radoff.

This began to evolve with the arrival of video game consoles, computers, and connectivity. How can we enter the metaverse?

The principle continues in titles such as Animal Crossing, Minecraft, and Roblox, cited by specialists as points of reference for the potential of the metaverse to create different experiences, making users not only protagonists but also creators of spaces and generating alternatives for social interaction.

When the pandemic broke out, some titles served as a refuge from lockdown, reporting significant numbers of users.

For example, Animal Crossing: New Horizons became Nintendo’s star game with sales of 10.6 million copies, which increased the company’s profits by 1 billion dollars, according to reports from the company that created Mario Bros.

For its part, Roblox went from being considered a children’s app to being listed on the stock market and becoming a benchmark for metaverse dynamics.

The platform is a game engine for creating 3D worlds, a space for publishing and distributing content, and a social network with 47.3 million active daily users.

However, disguising the future as fun is only a prelude to what is to come, as the metaverse is going to define the way we interact, says Mondragón.

“We’re going to have different digital lands, and each of them will have its own rules.”

The fact that the metaverse is an intangible universe doesn’t mean that the same principle applies to its financial ecosystem of cryptocurrencies, alternative currencies, NFTs (non-fungible tokens), and transactions that will eliminate intermediaries.

Trading in the virtual world yields profits in the real world. When Republic Realm acquired the largest tract of digital land in the Sandbox multiverse, it already had a plan to transform that game area of nearly eight million square meters (equivalent to about 1,200 real-world city blocks) in conjunction with Atari, the legendary video game console pioneer.

The virtual real estate company is also developing Fantasy Islands, a development of 100 luxury islands that, according to its press release, could generate profits of up to 30 million dollars.

“The more time we spend in these digital experiences, the more money we spend in these universes building our online social status,” notes the report The Metaverse: Web 3.0 Virtual Cloud Economies from crypto-investment firm Grayscale.

Intangible assets such as the first ever tweet, limited edition digital Barbie apparel, and Christie’s auction house reaching 100 million dollars in NFT sales attest to this.

Entertainment elevated to a social experience is one of the areas with the greatest potential. Sony took advantage of CES 2021 to launch an immersive reality experience with singer Madison Beer, who became a hyper-realistic avatar thanks to a virtual reality suit that allowed people to feel like they were at the Sony Hall concert venue in New York through PlayStation VR and Oculus VR.

“A million people can be in the front row, creating more value,” Radoff adds about the potential for the entertainment industry.

Molding the identity acquired in these virtual worlds will involve in-game spending; that is, investing in skins (digital clothing) and accessories to modify your image.

Luxury brands have already sold virtual models of their bags and even entire collections that no one will ever physically use, reaching 5.7 million dollars in sales.

Security in the metaverse

Horizons World, Mark Zuckerberg’s portal into virtual space, had barely began when debate began about the security of the metaverse after a woman reported harassment.

This happened in Quivr, a cooperative game in which you fight zombies. While she was playing, another user’s avatar “groped” her. “Sexual harassment is no joke on the regular internet, but being in VR adds another layer that makes the event more intense,” the victim claimed.

The case has put a spotlight on the issue of security in the huge space of the metaverse.

Jennifer DeWinter, video game scholar and professor on WPI’s Interactive Media Game Development program in the United States, points out that −as yet− it isn’t known what privacy regulations there will be.

She also questions content standards. “When a platform is created, it opens up a space on the internet where racism, misogyny, and pornography can exist.”

However, there are those who remain positive about the imminent growth of the metaverse. For Radoff, the takeoff of a new ecosystem configured in open systems without intermediaries could provide greater control to users, for example.

“I’m sure there will be some Web 2.0 companies that would like to control them, but it’s up to us to decide if we want to build within that.”

After all, the multiverse brings implicit reinvention with it. If you don’t believe that, just ask “Vengeful Grandmother” Anabel Ávila, a 61-year-old Spanish woman who has been given the opportunity to reinvent herself through video games. First, while going through a divorce; then, when the pandemic led to the closure of her business. She now challenges the young people who flock to the League of Legends online gaming universe.

In these virtual battlefields, her personality is little like the reserved person she is in the real world. That is the potential of a new order.

Tec de Monterrey teaches its first class in the metaverse

Students turn on their computers for their online classes, but they’re not connecting to a video call. Instead, they are entering a virtual world similar to a video game. In this way, Tec de Monterrey is giving its first class in the metaverse.

This is how the first course began on the Tec Virtual Campus, a 3D world created by the institution where students take classes and spend time together.

Professor and architect Antonio Luis Juárez Negrete, from the Querétaro campus, moved his entire class to the metaverse during the winter 2021 school term.

“My students told me that they enjoyed learning and having this near face-to-face experience,” says the professor.

The Tec Virtual Campus includes buildings such as a library, classrooms, auditorium, and outdoor areas where students can have learning experiences within the metaverse.

The first class in the Tec de Monterrey metaverse included activities inside and outside the classroom.

Juárez Negrete explains that he got the idea of taking his Alternative Systems and Installations class to the metaverse after attending courses at the Tec’s Center for Teacher Development and Educational Innovation (CEDDIE), which helps teachers work with technology for education.

“During the CEDDIE courses, I received some training to see what activities we could do in a couple of hours on the Tec Virtual Campus. I had a five-week class that lasted for several hours a day, so I sent them an email, and they said yes, that we were going to work on the pilot program,” recalls the professor.

That would be the beginning of the class Juárez taught during the winter term for students at Tec de Monterrey.

“The benefit is being able to be in a virtual space where you can teach the subject as if you were in the classroom. The fact that it’s virtual doesn’t hinder the objectives at all. It’s the first time, but I’ve sent the activity to see if we can present it somewhere else. In the future, we’re looking to lead other teachers to do the same,” says the professor.  (Isaac Garrido and CONECTA) 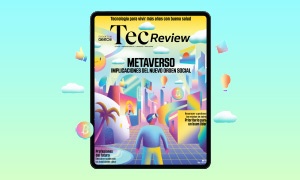